On 20 September 2018, Canon announced the PowerShot SX70 HS. Equipped with a 0.39-inch, 2.36 million-dot OLED electronic viewfinder (EVF), this versatile compact camera boasts a wide zoom range that covers 21mm at the wide angle end all the way up to 2730mm*1 at the telephoto end. It also comes with a large, easy-to-hold grip and up to 5 stops’*2 image stabilisation (IS), providing steady support for handheld shooters. High base shooting capabilities such as continuous shooting by up to 10 frames per second (fps) and 4K video recording promise further user satisfaction. 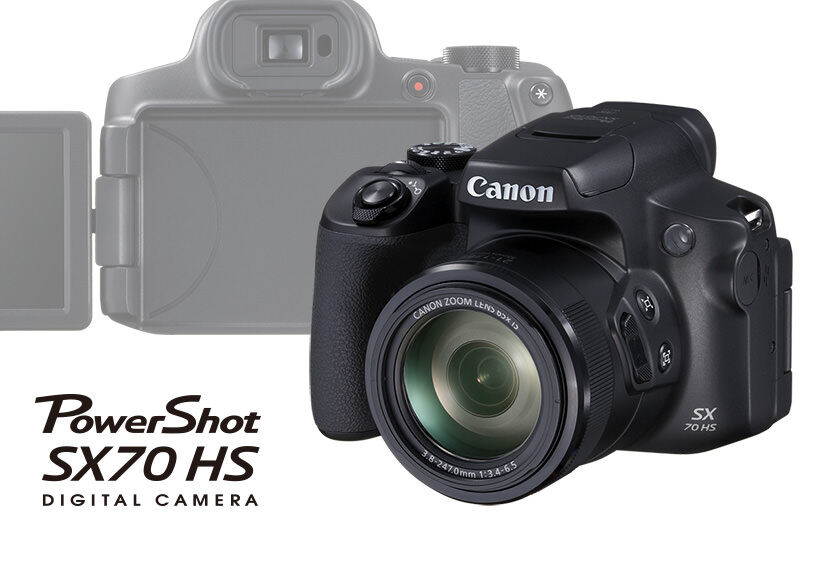 One of the key defining characteristics of the PowerShot SX70 HS is its powerful super telephoto zoom. Featuring up to 65x optical zoom (1365mm) and 130x with digital zoom (ZoomPlus, up to approximately 2730mm*), it is capable of capturing faraway wildlife and distant celestial bodies. At the same time, it also boasts the widest angle in its class at approximately 21mm, excellent for wide-angle landscape photography. There is no image quality deterioration with optical zoom, and clarity is retained even with the digital zoom. 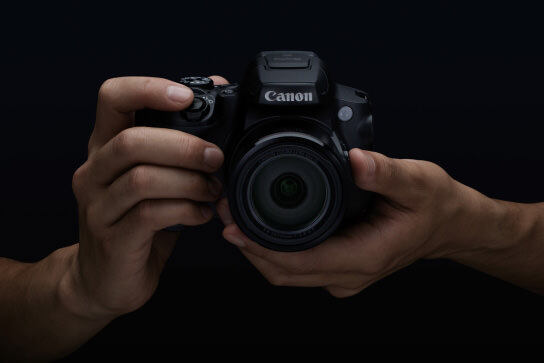 Each image you take is resolved by the high-performance Canon lens and captured by the 20.3-megapixel, 1/2.3-type back-illuminated CMOS sensor, which is known for its excellent light-gathering efficiency. The abundant data that is generated is then processed by the powerful DIGIC 8 image processor, which realizes low noise, high colour reproducibility and rich tonal gradations, ensuring high image quality over the entire zoom range. 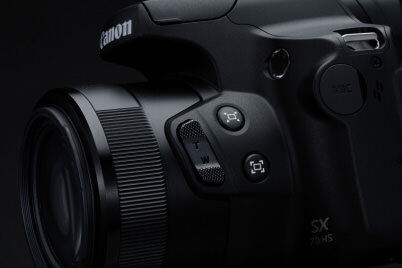 The PowerShot SX70 HS doesn’t just allow you to shoot from far away, it also lets you shoot objects right at the tip of your lens with its 0cm closest focusing distance. With such versatility, all you need is one camera to handle diverse shooting scenes.

Continuous shooting at up to 10 fps

The PowerShot SX70 HS is capable of continuous shooting at up to 10 fps with One Shot AF and up to 5.7 fps with Servo AF, ensuring that you will not miss picture-perfect moments in sports, wildlife, or any other scenes with fast-moving subjects. With improved Contrast AF, focus is established quickly even in dark scenes.

Up to 5 stops’ image stabilisation with Dual Sensing IS

Dual Sensing IS detects the amount of camera shake using data from gyro sensors and the CMOS image sensor, and then processes this information to stabilise the image. On the PowerShot SX70 HS, it realises image stabilisation of up to 5 shutter speed stops’ equivalent—enough to correct not only the camera shake that occurs during telephoto shooting, but also the slow but intense shaking caused by breathing and other physical movement. 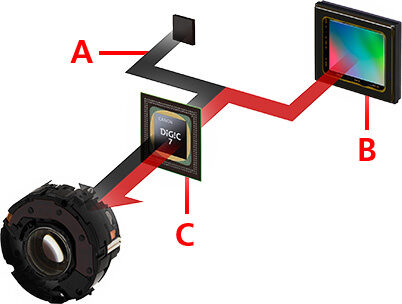 High-definition 4K movies that draw you into the scene

On the PowerShot SX70 HS, you can also shoot 4K movies that are as much as 4 times clearer than Full HD, resulting in footage that is sharp, detailed and draws you into the scene over the entire zoom range. Recorded footage is processed at high speed with the DIGIC 8 image processor.

The PowerShot SX70 HS brings true-blue viewfinder shooting to the PowerShot SX series with a 0.39-inch, 2.36-million dot OLED EVF, allowing you to see your subjects clearly and frame your shots even in bright sunlight. This supported by a large grip that enables a firm, stable hold on the camera. A great complement to the camera’s powerful telephoto shooting abilities. 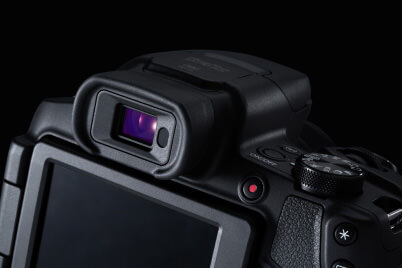 The classic EOS design with an optimised button layout

If the PowerShot SX70 HS looks strikingly familiar, that is because it inherits the classic design of EOS DSLR cameras, all the way from the large, ergonomic grip to the eye cup that makes EVF shooting comfortable. The button layout has been designed with easy operation during viewfinder shooting in mind: Your finger falls easily on the shutter button, the electronic dials turn smoothly, and the zoom button on the side of the lens barrel enables easy adjustment of the angle-of-view. The user interface will also be very familiar to EOS users. 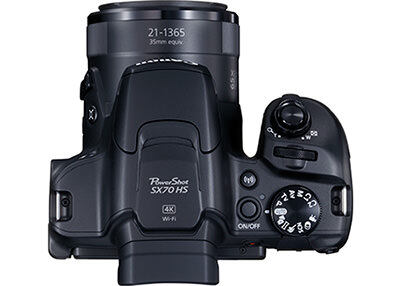 The PowerShot SX70 HS inherits the design of EOS cameras and features a button layout optimised for EVF shooting. Controls such as the shutter button, electronic dials and zoom button on the lens barrel have also been designed to ensure optimum ease-of-use during viewfinder shooting.

The rear LCD monitor is 3.0-inches, 9.2-million dots, and Vari-angle—perfect for ground-skimming low-angle shots as well as high-angle shots held above the head. It can also be rotated 180 degrees for self-portraiture. With support for Wi-Fi and Bluetooth Low Energy Technology, you can also easily pair the camera with a smartphone for easy remote control shooting and social media sharing.

There are no reviews yet.

Only logged in customers who have purchased this product may leave a review.